You are here: Home / Activism & Politics / Train them young to be stay-at-home dads

This post originally appeared on DC Metro Moms on December 27, 2008

Train them young to be stay-at-home dads 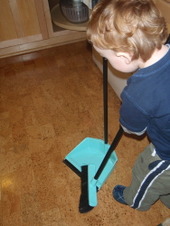 I know that it’s ridiculous in this economy to say that I didn’t want my husband to find another job right away, but it’s true. He’s been a consultant working on a contract basis for a year and half, since my son was just over a year old. The current gig was supposed to end this past summer, and I was really looking forward to having some time when I would not have to schedule every single second I would want to be away from my son.

But then the contract was renewed, and renewed. I got excited when it was finally going to die at year’s end. This way we could try on some new wake-up routines that wouldn’t jeopardize my husband’s wakefulness at work. I could finally create that yoga practice in the morning, or get up early to write instead of staying up too late since it was virtually my only time as a stay-at-home mom of a non-napping and not-yet-schooling child. This time with LJ as a SAHD could be the motivator for me to look for more tutoring and editing clients! I felt less frumpy just thinking about working more than three hours a week! With both of us at home, we’d have time to deal with the basement, to plan our meals (and share the responsibility for them), to clean the house well and often. Might we actually achieve something close to co-parenting or egalitarian domesticity if we were both at home, both working to find more work?

We’ll probably never know, because it looks like hubby’s got another gig to start right after New Year’s. Of course this is a good thing, but at first it really bummed me out.

Couldn’t we just have two weeks? “I’ll be off for 18 days,” he reminded me of this December break. I challenged his math, reminding him that two of those would be spent driving, six would be away from home (thus not allowing me that freedom to come and go, clean or write, make an appointment or go to the gym), four would be weekend days we’d have had anyway, and one of the remaining six at home would be a federal holiday. This is not the easy life of a homebound family of three I was going for.

But then I heard him negotiating salary on the phone and felt the excitement of starting something new. I saw him as the professional he is and remembered that I really don’t want to work 40 hours a week or be away from my son all that much. I just was hoping to be able to be away from him a little more in these challenging, tantrum-filled almost-three days without feeling guilty about leaving him with a sitter – and without having to do the legwork to arrange for a sitter. I have just four hours of consistent weekly childcare and lately have been fantasizing about using the afternoon program of next year’s three-day Waldorf preschool. If the boy spends a few weeks with his dad this winter, I imagined, all will be well!

But he’ll annoy his dad, too. And seriously, though my husband is a fabulous father and feminist, he would probably annoy the hell out of me if he were home all the time, not doing everything to my exact specifications. I keep thinking that if he just had to take over everything – for a few full 9-6 days or even – gasp – maybe for an overnight, things would change and he’d get it. Except that he already gets it. He appreciates all that I do for our son and tells me so. I just can’t always hear that for all the whining, and my husband is just never going to be the boy’s mom. That’s always me. I’m the only one who bore him and who will nurse him, and, in an attachment parenting family that is still nursing well beyond age two, that physical connection means a lot. It quells tantrums and calms anxiety. My husband can never play that card.

Besides, my fantasies are unrealistic. People are people. I talked just today with two other women whose husbands have been SAHDs at one time or another, and they’ve both loved it and been surprised at disappointments. If I want to feel like all is right with my marriage, this doesn’t have to be the way we get there.

My latest idea as we near year’s end is to just get serious about what I want my reality to look like and live from that place. I don’t need a full-time at-home partner to kick my yoga practice back into gear. I just need commitment. This doesn’t mean changes will magically happen; rather, it means I need to stand firm with what I want and decide what it will require to make it a reality.

So maybe we go to bed by 10:00 and I get up at 5:00. Or something. With my son, I follow through with things I really care about, like nutrition and the extended breastfeeding. If I really care about my own health and well-being – and I ought to because it took a lot of effort in those arenas to even get pregnant – then I just have to stand in a place of believing in those areas. It won’t do a lot of good instead to act like a victim of my husband’s work (which of course feeds us and pays for all that alternative medicine, yoga, etc.).

I’m sure we can make something work, or by the time we decide to give up, things will be at a new development phase with the boy, so maybe it won’t matter. Still, I do hope that by the time my son grows up, if he decides to partner in a heterosexual relationship, there will be an easy recipe for him and his baby’s mama to follow.