You are here: Home / Uncategorized / Toy’s the Season 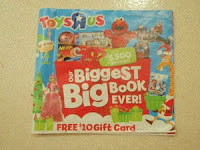 So what do you do when a near-elderly neighbor gives your kid a Toys R Us catalog (along with a few other Sunday inserts) as though it’s a gift?

After my husband accepted this offer, I ought to have put the stuff in the recycling bin immediately. But they went onto the floor of the car, and before I knew it, three-year-old eyes had latched onto them. “I want that Elmo magazine!”

(Don’t go thinking we have any fuzzy red bug-eyed animals around these parts. But he knows the character from friends & neighbors.)

So now he’s practically memorized the 80-page leaflet. At first, I was sick to my stomach with the comments about what he wants for Christmas. Yikes! Crunchy don’t play that! I just hosted a screening of Consuming Kids, for crying out loud!

Now he’s gotten more involved, requesting I whip up a whole family: “They are doing hair cutting. I want that to play with my brothers and my sister.”

Uh, he doesn’t have any siblings, and if he gets one, there are not going to be any S‘s at the end, if I have anything to say about it.

Today, we were cleaning out the car in the driveway when said materialist neighbor drove up. “We’ve got that funny magazine,” Boy Wonder announced. “The toy catalog,” I translated for some inexplicable reason.

She must have been thrilled and went on to ask, “Did you see some things you want for Christmas? But you know you have to be a good boy, don’t you.” The kid has never heard the word “good” from us Alfie Kohn disciples.

I just chuckled and hoped she would go away. Eventually, she did. Now I’m wondering if I can disappear the toy catalog without my son finding it in the recycling bin and having a fit over how cruelly I threw away his prized possession.

I might just have to burn it and bury the ashes in the woods.