You are here: Home / Activism & Politics / This IS my activism: response to Erica Jong’s attack on Attachment Parenting

I go away for one weekend to introduce my baby to her grandmother, and the internet explodes with responses to author Erica Jong’s diatribe against attachment parenting in Saturday’s Wall Street Journal.

I mostly appreciate the comments of Madeleine Holler on Babble’s Strollerderby in response to Jong’s piece. But a few things strike me as ideas I should get off my chest before I go to bed (unless my daughter wakes because, you know, I actually think it sucks to be hungry, and if I want a snack before bed, I get one, so why shouldn’t she?)

I’m bothered by the whole idea that the Attachment Parenting (AP) lifestyle keeps people from real engagement with politics. I can see how focusing on a new life keeps you a little out of the loop for a while; so does cramming for exams, or getting entrenched in anything intense for a period of time. But why does Jong have to talk about choices like cloth diapering and making baby food as just something that makes moms feel guilty? For me, these are political and engaged-with-the-world acts. 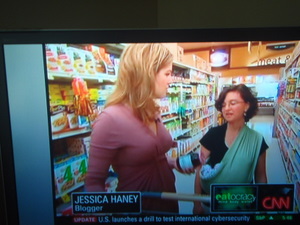 Me wearing my baby and talking about a health concern - high fructose corn syrup - on CNN. Am I a slave to the AP police or someone so focused on my precious baby that I can't engage in the real world?

I don’t accept that baby food — or even that much adult food — has to come from some mass-produced factory if I have the capability to make it myself with ingredients from farmers whose practices I consider responsible and healthful. Not everyone has the time and money, but if I do, am I supposed to not support sustainable agriculture because my doing so — or my sharing information about doing so — makes other moms feel bad about themselves?

Not everyone loves breastfeeding, but I’m not supposed to be passionate about something I think is a healthy and ecologically sound choice because other people will feel judged? Is it also shitty of me to be proud that my kick-ass woman’s body has made up every stitch of my daughter’s fiber since she arrived three months ago?

And the diaper issue. I don’t think it’s sustainable to toss a ton of trash into landfills because it takes less time than washing diapers. So I don’t do that unless there’s a reason, and then I just own my decision. I also don’t throw trash into the street or buy a lot of stuff that has a lot of waste associated with it. Can’t those be considered acts that have me thinking about the world outside my home instead of something that has me in a prison? What counts as engagement with the political process for Jong?

She says I must not have “time to question and change the world” that my children and I inhabit, but that’s exactly what I’m doing with my choices. It’s not that “anything less is bad for baby,” as though all I care about is looking good for a 12-pound princess. It’s that I’m making choices that I feel good about, for myself, for my environment, and for my children in the examples I want them to see. Thinking about the future I want my children to both inhabit and to help create makes me more engaged, more concerned. And probably more healthy.

It’s always interesting to imagine what gets a writer so angry that she makes sweeping statements and pronouncements like this. I feel like if you have this much venom in you, then you need a lot more help than you need the notoriety of igniting an internet debate. But if that’s what you have access to, maybe it’s a good substitute for working out your demons.

I had the impression that Jong was complaining about AP as though it was part of the “motherphilia” of the last two decades, a relatively recent phenomenon that includes us eco-crusaders. And yet, she admits to feeling guilty for her “imperfect attachment” when she left her now-grown daughter with nannies to go out on book tours and other travel. Is she implying that the AP police were already in force then? Or is it possible that maybe it’s natural to feel kind of off if you bail on your kid at an early age? Or that maybe guilt is a self-imposed emotion of people who are not committed to their choices rather than a product of the Sears family AP empire?

I’m glad Jong’s daughter, in her response, doesn’t seem bitter toward her mom, but I also don’t agree that her mom made the daughter’s choices possible. It’s great that Molly Jong-Fast can stay home if she wants (and write!), but her mom didn’t make it so women can work and breastfeed easily and without having to fight for a place at the pump. Her mom’s actions didn’t contribute to a positive attitude toward mothers.

I do like that Jong almost sounds like she respected her young daughter’s needs in not schlepping her hither and yon when Jong was committed to travel. Still, it sounds to me more like she feels guilty for wanting to be away than anything else. And who made her feel that way back in the late 1970s?

Jong’s piece sounds to me decidedly anti-woman, anti-mother, and anti-feminist, as though if you’re not letting other people help you raise your kid or you’re not doing everything with your own convenience foremost in mind, you’re trapped — and judgmental at the same time. What a narrow place to be.