You are here: Home / The Arts / There goes the neighborhood

Missing from my To-Do list today was the item “Watch elderly neighbor get carted away by police.” And yet, unlike many of the things on my To-Do list, this actually happened. And I can’t shake it.

It really was just a matter of time. Mimi had seemed to be suffering from dementia since we moved next door to her three years ago. She railed against the moving truck for being too close to her Mercedes, shouting “I used to be a lawyer!” The old woman, who wore her gray hair in a bun and wool skirt suits almost all the time, thought people were following her. I’d called the county to express my concern about her paranoia, but somehow it never went anywhere.

This was after she’d offered my son presents, French picture books and flashcards from the Borders that used to be up the street. And a Sunday Toys R Us circular that drove me nuts and refused to allow itself to be recycled for weeks. We wrote her at least one thank you note, maybe to cover all of them. She meant no harm, we knew. Still, we often joked about being sandwiched in between two of the oldest and weirdest residents in the neighborhood. When our other neighbors on the other side of our house sold us their run-down that we would renovate, we were thrilled to be getting a new neighbor with great landscaping on one side and someone new that we’d sell our own house to on the other. And maybe we’d occasion fewer awkward conversations with Mimi.

She washed that Mercedes way too often, and for an obscene length of time. She locked herself out more than once and refused to call anyone for help, probably because the car didn’t have current tags, or inspection sticker, or something that seemed glaring at the time. Who knows now what it was. Sometimes she’d appear at my door for reasons that never became clear. My mother-in-law and I helped her climb into her own house through her living room window, both of us surprised by how spry and nimble she was.

But last week, I came out to talk to the two people on the street, one of them a police officer and the other a county worker. I asked, “How’s our friend doing?” offering that I hadn’t seen her much, and that she still hadn’t done anything about the tree that fell on our old house back in June, with the derecho. They commented that they weren’t sure if she would have told them when that had happened.

That’s all I knew until today, when four police cars appeared on our street. And there were the relatives who’d appeared after the derecho, shaking their heads then at the tree they didn’t know had fallen, and now standing to watch the sadness unfold, five months later.

I went out once, feigning a peep into the mailbox on the porch. And then I just opened the window a crack so I could hear if anything happened.

Oh how I heard. The blood-curdling cry Mimi let out as the officers tried to get her into the car still echoes in my brain. It is the same cry I made when I thought a man on the bike trail might succeed assault me and the baby I was pushing in the stroller. It is the same sound that baby, now a toddler, makes when something she wants with all her body and soul gets taken by someone else.

It is a protest of “no!” that comes from somewhere beyond reason, somewhere deep inside, above our stomach and below our heart. A sound from the murky middle, the place where all fears sit in squalor until only the moment when they are zapped to the too-bright surface before they know they’ve left.

I don’t know what it looked like in that house, whether Mimi had any heat, or lots of vermin, or just hungry dust bunnies. I don’t know what she needs or what options anyone had. But I do know that she was once someone’s toddler, like my little girl across the dinner table.

She was once not alone. 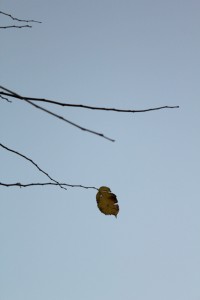 Being old is not a crime

Who needs a shotgun
when there is lace in the window?
How could, she,
her grey hair in a bun
her thin body in a wool suit and heels
everything she knows in a greying blue Cape,
require such effort?
Four police cars,
as many sets of arms on hers,
taught and fisted.
What did she see
when she looked outside?
Any day, or today?
A world that said it wasn’t safe
A world that said she was not enough
for herself
People who would take her
from the singular world
she had inhabited
into what, it must be impossible
to imagine
What could she do but cry out
wage her last protest
to be as she knew
to live as she would

After casting aside my poetry hat for far too long, my NaBloPoMo plan is to write a poem — and to take and post a photo — every day in November, spending less than half an hour on both. The hope is to drill down, to focus, to look for and create beauty.

Day 4: On Parenting and Sunrises

Day 7: What I want my children to learn from me

Day 23: Closing in on December

Day 24: Everything we need to know we forget before kindergarten

Day 25: Nothing but the moon