You are here: Home / Holistic Health / The pregnancy test, one year later

It was exactly a year ago that I found out I was pregnant. I tested two weeks after I’d ovulated and was ambivalent. On one hand, I had been told I was glowing, and I seriously felt buzzy electricity where those cells were dividing. It’s like there was a frequency, and every once in a while, I’d tune in and feel the vibration. So I kind of suspected.

But then there was the fact that this was our first try. And things weren’t exactly going swimmingly around the homestead, so it was with some hesitation that we even pulled the trigger. But I’d wanted my son to have a sibling, and I was far enough away from weaning and past the move and a busy October that it was the time to start trying, already halfway through being 36 and all.

I had, in fact,  been planning for this for months with detox and health consults and herbs. I started writing a “how I got pregnant” essay when literally asked that by a friend who was trying to conceive, and I have yet to finish it and add in a bunch of links to make it useful for sharing. But someday I will.

Right now, I’m still scratching my head at that double pink line on the first of five or six tests I took those first few weeks when I had zero symptoms other than two nights of insomnia while my in-laws were here for Thanksgiving. And scratching my head that a morning I woke up before dawn 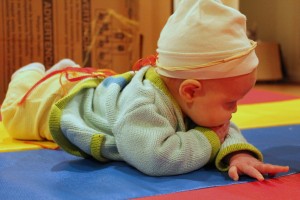 Pensive, like her mama, on this anniversary of the discovery of her soul.

thinking the day would look one way, I ended up with a baby in my arms less than five hours later. And now, here she is, with the fire wand her brother made three years ago at his first Waldorf school fall festival placed oh-so-lovingly on her head, the better for watching race cars on a plastic track.

I still cannot believe she is here.

Shortly after I found out I was pregnant, I started a little blog I don’t think I shared with anyone, except maybe a friend from my writing group. http://maybebabywaitandsee.blogspot.com/ Maybe my husband, but I don’t think so. I wanted to write daily, but didn’t, and then trailed off around 16 weeks. I just re-read a few of the entries and wish there were more.

There’s something people tend to say every time I talk about regrets, which include: The regret that I spent so much of the pregnancy afraid that I could pull of a vaginal birth, or that the baby would make it and be okay. Regret about the way the birth video and photos turned out (and our lack of preparation). Regret that I didn’t have a soundtrack and so that two hours in the tub was just so damn quiet. Regret that I didn’t do more hypnobirthing preparation so that I could have breathed through those early contractions more and waited to push so that those last pushes would have been more powerful and less of the this-needs-to-happen-put-it-all-in-even-though-you-don’t-have-much-left variety (both for my own sense of satisfaction and so that the baby wouldn’t have started to lose her color). Regret that I wasn’t enraptured in joy and smothering her with exuberant kisses upon lifting her out of the water but was so freaked out that she was out, that her cord was too short for high lifting, that she wasn’t active or crying, that she looked so darn freaky.

I don’t know. What is the right motivation to bring a child into the world? I wondered if I’d “heal” from my c-section if I didn’t have a vaginal birth. I did want another child, and I really wanted E to have a sibling. But I also wanted this for me. And yet, how fair is it to have a baby if you doubt your own investment as a mother. I’ve hardly looked at my daughter. I can’t keep my brain focused on her for more than half a minute, running down the list in my head of all the things I want to do, write, reply to, sign up for. Hell, I’m writing this instead of doing a lot of things I could be doing for my kids. Or I could be sleeping, or doing yoga, or cleaning the house so we all felt a lot calmer.

For three and a half months now, I’ve wanted to be pregnant again, to just enjoy the experience, to look forward to the birth. After I got past a big event when my daughter was six weeks old, I’ve wanted to live through another newborn period without so many irons in the fire and just really doing a laying-in babymoon. I have an essay in this anthology about fantasizing about a do-over for my son’s first year. I’m really good at wanting another chance.

But there are issues of time, and health, and  stability of various kinds — marital, mental, financial. And, though part of me thinks I want my children to be able to say that they have siblings, plural, what kind of childhood can I seriously give them if I’m this distracted with just two kids?

In five years, am I just going to wish I’d made up my mind, stopped wondering, and enjoyed settling into the present as a mother of two, certain that would remain my future?