You are here: Home / Activism & Politics / The clothes make the man, but do they make the baby?

I don’t understand why people get so defensive when strangers make the wrong assumption about their baby’s gender. Who cares what other people think? Why is it an insult either way? I’ve heard lots of people complain about ignorant commenters, “I mean, she had bows in her hair. She was wearing pink!” Or “He had on a dark collared shirt with a football on it.” These defenses are delivered as though anyone who could not understand these crystal clear messages was just clueless at best or possibly even traitorous. Play by the rules, people!

I’m actually heartened by the fact that other people would ignore these conventions and go with their gut. Perhaps gender could be just something one senses rather than something that has to be identified by a uniform. 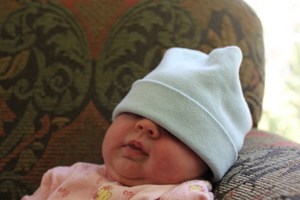 Don't make me see the world in binaries! 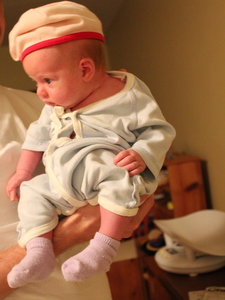 In any event, I find these reactions not just sexist but heterosexist. It’s as though people who cannot appreciate the dainty femininity of a girl are somehow implying that she’s, gasp, boyish. And if a stranger dares to call into question the masculinity of a little boy (even if his penis is still as small as a garden slug), well that just ain’t right. It all seems based on the notion that there is only one way to be, and that’s all predicated on being not the other because the other is what you’re supposed to marry.

I suppose I might change my mind about this someday, but if I do, will that mean I have started to accept a narrow definition of what it means to be a girl or a boy? When I was getting my M.A. in Women’s Studies, I scoffed at people finding out the gender in utero. But then I when I was pregnant with each child, I was so clear about the energy of each: my son told me he was a boy, and my daughter just screamed “girl” to me, so I chose to find out rather than be caught way too off guard if I was wrong.

I accepted plenty o’ girl clothes this time around but have also put her in a lot of her brother’s duds. And I don’t care if people think she is a dude. They always apologize, like they’ve offended me. No matter. She is who she is, but I get the impression that these people’s worry for me that their thoughts of “boy” are going to beam themselves into the baby’s newborn subconscious and turn her into a lesbian.

There is also the other reaction, where the person says of my son, “Really? He looks like a girl.” This sort of person seems uncomfortable with being wrong and so wants to hold firm to his or her position as though to warn me that I’d better cut his hair or just do something about him if I want him to be seen as a tough guy.

To be completely honest, my son did answer “pink” when I asked him what color Crocs he wanted if I went to REI. And they did have pale pink, but I couldn’t bring myself to get them. They’d get so dirty so quickly! And he is always saying that his favorite color is blue… So I, too, am guilty, but he wasn’t with me, and if he’d been there and really felt strongly about wanting those exact pink ones, I would have bought them. I hope.

But I don’t mind him wearing the barettes a friend got for his sister, and I think it’s funny that he found it funny to put on a pair of black pumps of mine. I hope I can stay in that place instead of running out of REI with no purchase made.

So I offer here a few of my daughter’s recent looks. I just think she’s cute and that small clothes are cute. If you saw her on the street, what would you think she is? And why would you care?