You are here: Home / Activism & Politics / The 12 days of spring break

On all twelve days of Spring Break, Mother Nature gave to me: lots of pollen falling from trees.

There were only supposed to be ten days. And they were going to be full of activities we don’t have the time or energy to do when school is in session.

But then there was pollen.

And, on the day of my son’s class spring festival (Friday before break started), the county decided to repave the road not even a block away from the park. So the air was filled not only with the sneeze-inducing promise of new growth but also the exhaust of construction vehicles and the toxic-sweet smell of tar (or whatever petroleum-based product they were using).

“I think he’s tired,” the teacher said when I picked up my red-eyed boy that afternoon.

“I had a rough afternoon,” my son said on the way home before explaining why he had to leave the room and go to the office.

We stayed home most of Saturday and Sunday.

Well, Saturday morning, it was raining and we went and did some natural dyeing with folks from his school. But we didn’t follow through on some other plans and didn’t go to the Hidden Oaks Nature Center dinosaur egg hunt. We just hung around while it rained and did some work in the yard when it was sunny, paying for it each time in more eye-rubbing and sneezing by our five-year-old, E.

Monday, a neighbor’s mother took E to the park with her grandson for a glorious two hours. The baby slept the whole time. It was bliss. The three of us had a nice lunch and went to the library and grocery store. I was feeling good about the week ahead.

Tuesday, though, E looked like a heroin addict with his puffy red eyes. Still, I was determined to attend a Waldorf-at-home playgroup/program I hope to take the baby to in the fall when her morning nap might be dropped. The sitter came over and did my dishes while the baby slept, and E and I had a great time at Green Springs Garden Park in the mom-created and -led program, doing the chick pom pom craft and enjoying the story of the giant turnip, and browsing park’s lovely shop. Although I’d already bought Wildflower Bingo, E didn’t know that and liked the looks of Bird Bingo. I decided the cousins would get wildflower and we’d learn about birds. That game got a lot of play over the rest of the week.

What a delight it was to have a fun morning with my son alone knowing that his sister was where she wanted to be — at home, asleep. But still, it was no good on the eyes. (Mind you, I claim to have cleared my seasonal allergies years ago through BioSET allergy elimination, and I think my GFCF diet helps, too. But he has a pretty clean diet and had no trouble last year, so who knows).

So when Wednesday rolled around, I considered meeting up with folks from school at the park but instead honored the baby’s nap and braved annoying traffic for a short trip to the National Zoo. We stuck to the the pizza play area and the farm (which I hear they might close. Check out the website for Save the Kids’ Farm and their Facebook page) and Amazonia, which we’d never gone into before. “I’m going to tell everyone at school I saw a stingray!” E exclaimed, prompting his mother to feel guilty that he doesn’t even remember his one trip to the Baltimore Aquarium over three years ago. 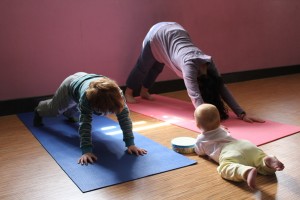 Thursday morning, I went ahead with plans to go to a “Movers and Preschoolers” yoga class at Lil Omm. I’d already registered and paid (only to find out that my first class is free, so I have a credit on my account). Even though we left late, got stuck in traffic and took a wrong turn, we got there just as class was starting. How fun to see both kids enjoying an activity together. And I got to do a little yoga. Besides, I learned what the heck the Palisades were. And who knew that the elusive organic Granny Smith apple — which has been absent from the shelves at MOMs lately and not at Trader Joe’s, either — would be available by the bag at a small throwback Safeway? We went in to get eye drops and ear drops (E had to have wax removed recently), both of which he resisted using. We left with apples (which may not be in season but are the least sugary and easiest for me to tolerate) and then, when it was clear my paltry prepared snack was too little to sustain my boy if I was going to pick up hand-me-down girl clothes and the farm food on the way home — we returned right after we exited in search of organic cheese (they had only a few options in the house brand.)

I got lucky that the neighborhood girl was available to come over while I prepped dinner and got ready for my Holistic Moms meeting. Baby girl came along and had a great time crawling around with a bunch of age-mates, but she didn’t get to bed until 10:30, roughly four hours later than she should have. Yikes. 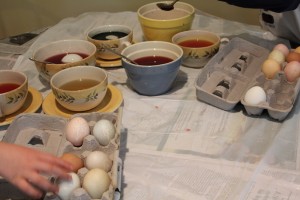 Friday morning we worked on making natural dyes for egg coloring. I have to admit that I went out and bought white battery eggs (in a styrofoam carton, no less!) merely for the artistic experience of coloring them. I eat so many eggs, I’m pretty greedy about my little pastured treasures. And I just didn’t see how the brown shells would work with dyes, which I’d never created before. I’ll post more later about how I did it, but it was really a delight that my friend K of Blooming Boy came over with her two kids. Her son and mine decorated eggs while the sisters watched from high chairs. She was very patient and kind with my nutty attempt.  It was such a delight to have company.

Saturday E put on “plays” with whatever props he could find, and Sunday (Easter) we did a bunch of cleaning in the morning after I went on a run that felt great. We also planted more flower seeds, many of which have already sprouted! E enjoyed the crafts the Easter Bunny left him and the butterfly/flower puzzle the Switch Witch left in exchange for the candy he didn’t eat from an egg hunt a few weeks earlier. Easter dinner was made largely by papa LJ, which was such a delight. 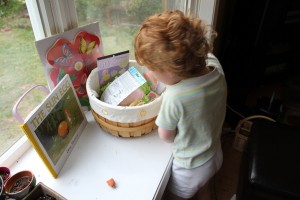 What the Easter Bunny, the Switch Witch, and his parents gave my son for Easter. (Note eaten carrot.)

Monday was still a holiday from school, and we went to our energy healer who said E’s liver was congested, that he was reacting as much to pesticides and other environmental pollutants as to pollen, and that he was having a hard time digesting sugar and that he needed more probiotic to fight Candida. That afternoon, he got his first bath of baking soda and Epsom salt, which she said he needed daily.

It was clear that he was suffering too much to handle going to school the next morning, so I spent probably an hour that night trying to find a sitter to watch him while baby girl got her very belated newborn hearing test the following morning. I struck out.

Tuesday morning the hearing place called to say they’d have to reschedule, so I stopped rushing around, and, after I put the baby to sleep, E and I had a really nice yoga practice.

I do have to admit that I was assisted this week by the county library’s Spanish/English storytime and “get to know your community” video, Cuentos y Mas (Stories and More) and several audio books. Yes, I realize it was Turn off Your TV Week; it had been off for weeks before this! And at least we avoided characters.

Wednesday morning, the fabulous sitter returned to us and kept both kids happy indoors and out while I had a fabulous nutrition and spiritual consult with a practitioner I consulted years ago before she moved out of the area.  I will have to write more some other time about the gifts she gave me in that hour. At 1:00, I left the sitter to deal with the dishes again and took both kids (because the baby wouldn’t sleep) to see the pediatrician, who said E could return to school and didn’t have contagious pink eye. At 4:00, I took him to a craniosacral appointment, where the practitioner said he was pretty upregulated and that his central nervous system calmed down a lot with  pressure around him as he nestled in her lap. We came home to dinner made (thanks to the sitter chopping vegetables). I managed to get the baby to sleep before heading out to my first postpartum tutoring session.

So, without much in the way of breaks from just plain parenting or dealing with someone’s health, I’ve been a little MIA.

On one hand, I’ve loved not having to get up and go in the morning and seeing what creative stuff my son comes up with on his own. I’ve gotten a little more done in the house, even as it is messier from constant play through the day. I can certainly see the appeal of homeschooling, especially if E were more often somewhat subdued like he was this week. However, I couldn’t do it without some regular childcare — both so that I could attend to E solo rather than split attention with the baby and so that I can take care of my own health. Food preparation for me takes an enormous amount of time, and so does consumption. If I eat rushed or on the go, I’m in a bad way.

I would also want to do it very Waldorf-y, and it does take time to figure out how to do that, at least for someone like me who doesn’t have a foundation of rhythm, ritual, consistency, intentionality, mindfulness. Well, I’m still cultivating that all, anyway.

What I hope is that we get into the public magnet school we really like and that I will then be able to afford/rationalize a little childcare for Baby Girl AJH such that the time I’m with her is rich and enjoyable instead of scattered and so that my home life in general can feel more centered. I am excited about the Waldorf at home communities providing the support for figuring out how to make that a reality.  And if public school doesn’t work out and the Waldorf school is full, I will step away from some other things and just embrace homeschooling until we figure out what’s next.

For now, I look forward to the unscheduled days of summer (after his three-week day camp is over), but I also look forward to another 6 weeks or so of school before that! This morning went well, and we’ll try a full day tomorrow before breaking for the weekend. I will miss the low-key time at home with my son but know he’s getting a lot of his needs met at school in a way I just can’t do at home full-time.