You are here: Home / Holistic Health / Tears on my yoga mat

Yesterday I went to a yoga class for the first time since the baby was born five months ago. And I cried.

It was a big deal to get out the door. For weeks, nay, months, I had been looking up schedules at all the local studios to see when they might have a class that might possibly work for me to attend. Between erratic sleep and unpredictable eating times and needs (both mine and the baby’s) and plenty of other things that need to happen on the weekend, yoga never made the cut. 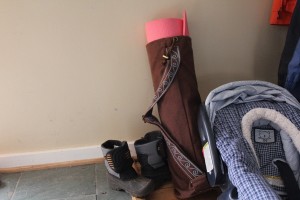 Evenings were busy enough already, and weekdays I have no baby childcare. You’d think I could have gotten to a mommy and me class, but with all the driving I already subject the girl to for her brother’s preschool, I’d kind of just rather let my little one sleep than take her out again to try to keep her happy while I half-do some half-moons.

I was, to put it mildly, out of practice.

That’s part of the reason I chose to go to a class with Teresa (not her real name) as the teacher. When I was pregnant, I’d come a handful of times to Teresa’s gentle class, where once I was one of only two students. She was a mom, a casual teacher, an understanding spirit. We’d emailed a few times, and I’d shared my birth story with her. The studio was where I’d done some prenatal yoga classes, which were better-attended but still small and friendly.

To return to yoga with Teresa at this neighborhood studio felt safe and familiar. How many people serious yogis are going to come out to a yoga I class on a Saturday morning? I thought. As I registered online, I imagined Teresa checking the roster and smiling in anticipation of seeing me. I envisioned some chatting as I set up my mat, maybe even joking about how it was on that very surface that my water had broken when I went up into bridge pose the morning my daughter was born.

But, as usual, I left kind of late, trying to fit in just one more thing since the baby was napping. I arrived an eyelash after start time, approaching the door just as Teresa was about to lock it. “Sorry, I’ve got to get started,” she clipped. It wasn’t rude, but it wasn’t the homecoming I expected.

Nor was the sight of the room. It was packed. Teresa announced that they’d have to make a fourth row. I could have turned around and left, but I had paid my $20 and actually left my house. Alone. Going back to a whiny four-year-old didn’t sound fun, even though I felt kind of shamed.

“It’s good to give yourself a few extra minutes to work out these logistics,” Teresa said to the room in a lighthearted tone that suggested,”I’m not trying to make you feel like shit, Jessica, but this happens more than I’d like, and it’s really not respectful of everyone’s time.”

I dumped my bag and jacket into the cluttered coat room (where I was used to seeing bare shelves) and quickly claimed the spot that was being created for me at the front of the room. “I did the best I could,” I muttered. Teresa made some “it’s okay” kind of comment.

Then I think she got it. As I was rolling out my mat, she asked, “Have you been back yet?” My answer was an unquestionable “No.”

I was already starting to cry, but there was no going back now. I couldn’t leave the class without totally disrupting it. We were all in our places. I looked around for tissue and saw only a roll of toilet paper lying on its side next to the iPod. My sleeve would have to do for my snot.

As Teresa began talking us through our opening centering, I closed my eyes and let the tears roll. The people next to me probably knew something was up, but I wasn’t sobbing audibly. Teresa, I’m sure, saw.

Thankfully, the class was not physically challenging, with no partner work or moving to the wall. I simply staked out my little spot on my mat like everyone else on theirs and tried to be just one of the masses. Eventually the well was dry, but, I never fully lost my edge. When Teresa came around to make an adjustment to my pigeon pose and ask me if I was okay, all I could say after a few beats of silence was, “I’m here.” She cooed, “I’m glad you’re here” in response. I didn’t really believe it.

Of course I also couldn’t blame her for wanting to start on time. Goodness knows, I could never tolerate lateness gracefully (and goodness knows even better that I would never have it in me to be an open-hearted yoga teacher). Still, I was disappointed and hardened. I tried to avoid Teresa after class by leaving right away, but that just put me by the doors as she opened them, which gave her the chance to say things like, “I’m glad you came” and “We’ll see you again real soon, okay?” I put my jacket on facing the wall and said only, “I”m sorry I was late.”

Then I left and sobbed some more. The idea of walking into my home a bigger wreck than I was when I’d left — ostensibly to get enlightened — was not appealing. Who wants to greet her husband and visiting mother-in-law with post-yoga tears? What kind of thank you is that for watching my two children for two hours? If this is how I look after yoga, the rest of the day (week? month? all of parenthood?) looks pretty grim.

Luckily, my sister was able to clear a little time to talk me down. I poured out my tale of woe to her over the phone as I sat in front of the house in my car, getting chilled with the engine off. A neighbor tried to get his dog to pee on the sidewalk, but I let my voice keep cracking. She said all the right things about me, the teacher, my husband. She understood how overdue it was to take care of my needs, how simple and yet earth-shattering for me it was to get out the door, and how benign yet deflating it was for a teacher to regret my timing instead of celebrate my return.

When I walked in the house, I knew that if breakfast was not ready, I would be able to calmly ask LJ to make it like I’d asked. I knew that if the baby was awake and hungry, I’d explain that I needed to eat first. If asked about my red eyes, I believed I’d avoid self-flagellation and just say that it was a big deal to get to my first yoga class in over five months, and sometimes big deals come with big reactions.

As it happened, there was breakfast not only made for me but positioned into a funny face like I do for my son. My husband’s inquiry about my demeanor was gentle and appeased with “I just got really emotional.” And he even asked later if I wanted to talk about it some more (my dream response!)

Maybe we fought again the next day. Maybe I started to wallow in self-pity later that weekend. But at least I got through The First Yoga Class and its immediate aftermath.

Sometimes maybe we all do need to just cry it out.

Have you ever found yourself in tears in a place where you really didn’t expect to lose it? How did you rebound?