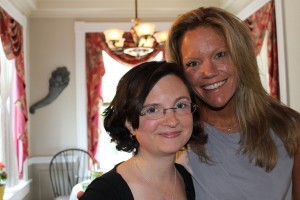 When Robyn O’Brien’s youngest child had her first allergic reaction to eggs, I had already — over two years earlier — given up vegetarianism and soy in a quest to regain my fertility and, a few months later, given up gluten and dairy in a quest to heal my gut and my body overall from adrenal fatigue and autoimmune hyperthyroidism (Graves’ Disease).

That year, 2006, was about the same time that I figured out I also needed to avoid corn, but through my whole diet overhaul, I never did much research into mainstream approaches to allergies. I had some some “allergy elimination” through BioSET, which did seem to get rid of my seasonal allergies and specific symptoms to specific substances like sulfites.

Since I was already on the bandwagon to feed my child a clean GFCF diet even before I became a mother, I didn’t pay much attention to the “allergy” world. So when I picked up O’Brien’s book, Unhealthy Choice: How Our Food is Making Us Sick and What We Can Do About It, I was startled to find in one place so much of the information I’d been gathering piecemeal over several years. It was a gold mine! And to be told from the perspective of an unlikely activist, it’s a compelling read for even the most reluctant believer (I would imagine).

It was a thrill to be able to meet the author and AllergyKids founder in person and hear more about her story. Thanks to Stonyfield Farm for sponsoring a luncheon with O’Brien at Restaurant Nora.  I’ve also written a report for my Washington Times Communities column, but want to highlight a few things here.

One of the points O’Brien made over and over is that foods are often made for European buyers and buyers elsewhere in the world without the additives that companies stuff into American versions. We need to demand that companies take out dyes, high fructose corn syrup and the like, by voting with our dollars. If we buy foods that do not contain unhealthy ingredients, O’Brien said, the industry will provide more of those options and the accessibility of healthy options for everyone will increase.

Now, I’m not going to go out and shop at Wal-Mart or buy Coca Cola or Kraft products just because they have reformulated their products in the past few years. I still don’t see foods in a package as generally being Real Food or particularly “nutrient-dense,” which is the phrase O’Brien promoted in her talk. But, I do realize, as O’Brien and other food bloggers and bloggers who write about raising kids pointed out, that food safety is a socioeconomic issue and a political issue.

There are food deserts in a lot of places — including just miles away from our luncheon elsewhere in Washington, D.C. And the reality is that foods with HFCS are cheap because of corn subsidies, which is a real political issue. We are funding farmers to pump their foods full of a sweet substance that doesn’t offer any fiber or minerals and that is likely to be genetically modified, which might increase its likelihood to trigger food allergies.

So if people are going to buy food in a box, at least it can be without substances our bodies were never designed to handle. I’d still rather buy straight from the farmer — and I will if I can. But I am in a position of privilege, and until we can shift some major things around politically and in the way people plainly think about food, every little step toward simpler ingredient lists is a good one.

When asked about cost and “results” of eating a diet of mostly organic food, O’Brien mentioned several times that she saves an enormous amount of money and time by not driving to the pediatrician so often. Her family is healthier and requires spending less money on healthcare because they are eating for health instead of managing disease.

I feel like I make this point a lot. My son has had homeopathy and bodywork but never a mainstream medication. We heal through food and we prevent illness through food. Food is our medicine. So if it costs more but keeps us healthier and happier, that’s worth a whole lot.

I could write a tome on this, but readers would be better off just checking out O’Brien’s book!

After scoring the last available library copy in my area to read in preparation for the luncheon, I received a free copy yesterday in my luncheon goodie back. The copy I ordered just came today from Amazon.

I can already think of at least a dozen people I want to give it to!

Previous Post: « When life gives you chocolate, make coconuts: Fun Food Friday
Next Post: Rally for Food and Farm Freedom brings a cow to the Capitol! »