I just learned from Nancy Piho’s My Two-Year-Old Eats Octopus blog about the results of a new study on children and cereal. In a study published in Pediatrics, Yale researchers found that children will eat low-sugar options if they are offered. The gist is “If you serve it, they will eat it,” suggesting that offering sugary cereals “may increase children’s total sugar consumption and reduce the overall nutritional quality of breakfast.” What a surprise! The statement at Yale’s public affairs office concludes, “The Yale study shows that children will consume and enjoy the more nutritional option when it is offered.”

None of this is news to me. I’ve never even considered buying my son “kid” cereal. Maybe I have being gluten-free to thank for some of my willpower. 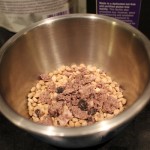 But it’s not as though the  low-sugar gluten-free cereals he does sometimes eat are actually good for him.  Sally Fallon has a succinct piece here on the experiments with rats that showed eating cardboard was healthier than eating cereal, according to research by Paul Stitt, author of  Fighting the Food Giants. Sugary or no, all these boxed cereals have undergone a process called “extrusion.”  In a longer article entitled “Dirty Secrets of the Food Processing Industry,” The Weston A. Price Foundation explains that extrusion “destroys the fatty acids; it even destroys the chemical vitamins that are added at the end. The amino acids are rendered very toxic by this process. The amino acid lysine, a crucial nutrient, is especially denatured by extrusion.”

I decided a while back not to bring this kind of food in the house. After spending $10 a bag on several versions of “live” cereals made with sprouted and/or soaked nuts and seeds, I made some of my own by rolling some crispy nuts in a little honey, salt and coconut 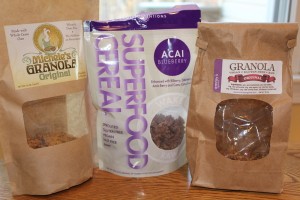 oil. I called it homemade granola and loved it, but my son already has swallowed the mystique of the box. Maybe because we don’t have a whole lot of food in boxes or packages, somehow this seems novel to him.  And seeing your father enjoy a bowl of cereal can be a powerful symbol.

So, I’m not being a dictator about it, and some boxes have made their way back into our cupboards, but it sure isn’t “what’s for breakfast” around here. There are always eggs and a meat we feel good about, usually bone broth/chicken stock with some veggies, and live sauerkraut. And at least the milk is real.

If we’re going to talk about “more nutritious options,” how about we leave boxed cereal off the table? Literally.