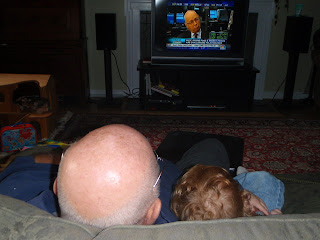 Well, there’s a first time for everything. My son fell asleep in front of the television on Friday. We normally do not have the television on during waking hours except on weekends during sporting events. So it’s not like there was ever really the opportunity for this before grandpa wanted to check on his stocks. But seriously, toddler’s first couch nap, during CNBC financial news in the midst of an increasingly scary recession?
Of course, it was also slightly problematic that this nap around 4:30 p.m., and I was counting on the boy to fall asleep shortly after we pulled away from the house that night around 7:00 for a 3+hour drive up to my sister’s. We had to wake him to have dinner around 6:00. In the car, he and I sang through Music Together for about 90 minutes until about 9:00 when he finally succumbed, only to then spring wide awake when we got to her place at 11:45 and announce after an extra special-circumtances nursing, “I want to wake up. I’m hungry.”
We ate, he finally slept and then showed nary a sleepy sign the following day for my sister who was babysitting him so I could attend a nearby conference. This time he conked out within minutes of leaving her house for home around 8:15 p.m. and transferred into bed without a problem, sleeping until after 8:00 the next morning.
Today I was to be on solo parenting duty again after lunch, after LJ and grandpa went to their second opera of the weekend (!). Nap failed again and this time I gave a warning, something I never do. I told the boy I’d stay in his room if he stayed quiet and lying down. When he asked for a book again, I told him I was outta there until 3:00, about 45 minutes later.
I’ve never been part of the Cry It Out crowd, but this kid needs to hang by himself. He did cry, but then he’d knock over a chime bear and get distracted, and I’d watch him climb into the rocking chair and read a book. He went back and forth between wails and giggles for an hour. This polarity is the theme lately — we’re both intensely happy or intensely annoyed.
At 3:00, he was whimpering a bit, and I came upstairs announcing cheerily “It’s 3:00!” He started in on a conversation with me, explaining when I asked if he’d peed on his seemingly wet blanket, “No, I just cried on there.” Ouch. And yet, well, if he can just report that like the weather, should I feel so terrible?
And what was I doing while I left my son unattended (all the while listening and watching on the monitor, mind you), alternately dejected and delighted with himself? Doing laundry and posting on Craigslist and a local email list for an afternoon babysitter.