Who knew diner food could be health food? I had no idea that the Silver Diner – a chain of restaurants in Maryland, Virginia, and New Jersey – was on a mission to serve local food and offer healthier choices. When I attended a special evening recently for food bloggers, I got a true taste of the company’s exciting efforts. 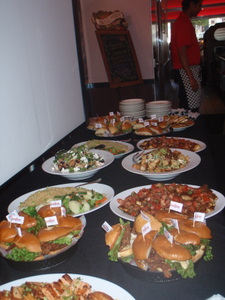 A showcase of local food

Chef Ype von Hengst, and his business partner of 26 years, Silver Diner CEO Robert (Bob) Giaimo claim to have been at the forefront of the healthy food movement. The first level, Bob said, is folks who have followed the work of Alice Waters. Then we have the post-Food Inc. generation – people who have seen the movie and are just starting to learn where food comes from. These folks are beginning to understand (thanks probably also to the Ominvore’s Dilemma) what farming in an unsustainable way can do to the soil and to our bodies. They are starting to connect the dots and consider their carbon footprint and are just now willing to pay more for organic or natural food. Silver Diner did a survey that indicated people would be willing to pay more for local, organic and/or naturally-raised food, so the company spent an additional $1 million and raised some prices by 50 cents.

Bob and Ype described what produce and meats they are getting from where (eggs and meat from Black Eagle Farm ), and how the foods are grown and raised. In our folder was a fact sheet about the many reasons why we should eat local produce and organic meat that is raised without antibiotics, hormones or genetically-modified foods. 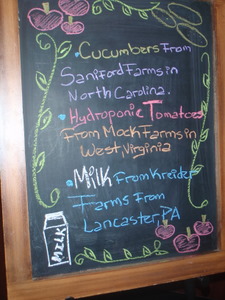 What an array of local foods! In a diner!

While we enjoyed sampling a number of delectables — including a salad with local blueberries and goat cheese, Virginia mahi mahi with lavender and lemon sauce, gluten-free brownies and a bunch of other lovely items that this gluten-free, dairy-free mama didn’t try — Bob and Ype explained their commitment to getting kids to eat healthy from an early age. “We want to be part of the solution,” Bob said. As such, Silver Diner has a whole lot of options on its kids’ menu, from sides of fruit and veggies to whole wheat spaghetti, eggs from a local Amish farm, and chicken and salmon dishes. When asked, I told Bob that my son had never ordered from a children’s menu, but I’d also never seen one with this many decent options.

Silver Diner is also launching a new “Eat Well, Do Well” rewards program. Participants benefit by getting $5 for every five visits, and local schools stand to benefit if they sign up for the program. Funds raised through the loyalty program — $30,000 — will be given to the first 80 schools who register in the program to help the schools fund their participation in Farm to School Week (the second week of November in Virginia). Additional funding will be allocated to all participating schools throughout the school year to support health and wellness programs.

On June 11, Silver Diner launched a mini farmers market outside the restaurant on Saturday morning with the idea that the local cheeses and other items people can buy in the parking lot will be the same food they can get in the restaurant. 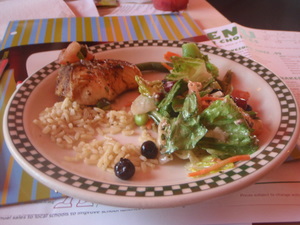 I was excited to learn about this program and to hear Ype acknowledge his German upbringing where milk was taken fresh from the cow to the table; processing reduces the nutrient value by 40-50%, he said, though he didn’t go on about the merits of raw milk over pasteurized, nor did he address the fact that the kids’ menu features fat-free ice cream instead of ice cream with the fat necessary for nutrient absorption, and, for kids’ brain development. There was a Weston A. Price Foundation chapter leader in attendance who said Ype had been given a lot of information at the last event, and I chatted up Bob about the early 20th century research of the dentist whose travels brought him a number of important findings, including the realization that people need natural sources of fat. 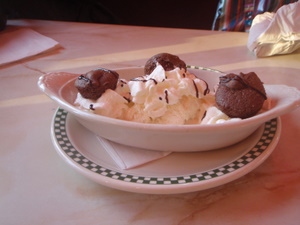 I do have some questions I’ll be posing to the friendly and engaging Ype when I get a chance – like about fat, about their method of making French fries, the ingredients in their gluten-free foods, what they use for sweeteners, etc. But overall, it’s pretty exciting to see a blackboard of locally-harvested foods in any restaurant, especially a chain diner.

I look forward to learning – and tasting! – more!

Information on other initiatives from the Virginia Farm-to-School Work  Group that developed this partnership is available at http://www.farmtoschool.org/files/publications_285.pdf