This post originally appeared on August 5, 2009 on DC Metro Moms 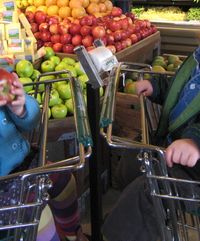 I hope I didn’t just shame my friend at IKEA. It was a rainy Sunday morning, getting busier by the minute.  Long gone was the relative quiet we enjoyed within minutes of our 10:15 a.m. arrival. The sight of so many people trying to make sense of their lives was making me woozy, even without my husband and son, who were (thank God!) in another section of the store. Just outside the elevator, I heard my name shouted and turned to fine a good friend following me into the silver moving box. The first thing that dropped out of my mouth was, “Oh! Hi! Wow, you have two kids standing in your shopping cart!”

This is probably a pretty normal occurrence, this thing of kids standing in the cart. But I don’t do it. At least not right now. We are child seat or you walk. I got scared into following the cart rules a few months ago in Staples. Just after going to the bathroom, my son executed on one of those visuals with the line through it: he pulled the whole cart over on himself. In the process, he smacked his head on the ground and scraped up his leg, not to scared the crap out of himself (and me). Normally a quick rebounder, my bruised and upset boy begged to go home. I gave him some homeopathic Arnica pellets and made him suffer with me to wait for pre-paid flyers for our for sale by owner open house to print (which, incidentally, never worked, so I had to wait even longer to get a refund). We didn’t need stitches, obviously, but I did get religion on the cart rules.

I then became one those moms who say things like “we do this because it’s safe” even if other people are doing something that looks more fun. Apparently some 24,000 kids are hurt in shopping cart injuries one recent year, but how does that compare to injuries, say, blowing bubbles? I back myself up to my pint-sized thrill-seeker by pointing to the picture on the cart seat of what not to do whenever my little dude whines for a special ride.

But he wasn’t with me in that IKEA elevator. I had no need to make a statement or get on a high horse (as if that’s ever very attractive). I wish my friend could have heard the sound I imagined my hand smacking my forehead would make. I think I tried to explain away my comment with something like “I never thought about how you get through IKEA with two kids. I’m overwhelmed and frustrated and I don’t even have the one in sight!”  Insult + self-deprecation = a wash?

I also complimented her – genuinely! – on her impressive calm despite having just five days left before she’s going to move. I moved three weeks ago and still can’t find my camera battery charger. And I even have two chargers, because I misplaced one long before I had anything as stressful as moving going on.

That would never happen to my friend, moving or not. She seems pretty Zen all the time. It would be just like her to not even notice that I made an unnecessary and annoying comment.

Or, if she did notice, she’s probably such a cool customer she wouldn’t even hold it against me.