You are here: Home / Activism & Politics / On eating, blogging, and parenting

Being one of some 1500 traditional food enthusiasts here at the Weston A. Price Foundation Wise Traditions conference is humbling and exhilarating. So many people have regained health or healed their children through real food. The stories at the Gut and Psychology Syndrome (GAPS diet) lecture alone were amazing. It’s easy in mainstream circles to feel like an outcast, a weirdo. When your diet is so restricted, you just smile and nod when others wink and nod about chocolate, or wine, or even about fruit or raw veggies, which I still can’t tolerate after nine months on the GAPS diet. 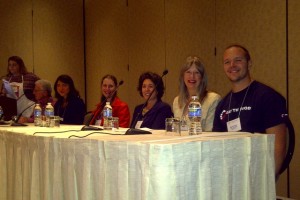 But here, as I listen to people who’ve put their whole family or hundreds of their patients on the GAPS diet and who, unlike me, actually render their own goose and duck fat, I feel like I’m getting off kind of easy, doing okay after nine months on the grain-free, starch-free, sugar-free diet.

And yet, listening to Dr. Natasha Campbell-McBride talk about the physiology of damaged guts with damaged gut flora, I’m ever more determined to get well. As long as I continue to suffer from psoriasis, I will know that things are not okay in my body. Even if it goes away in a few months, as it did after my first child started sleeping (rather than nursing!) through the night at age two, I know I need to be very careful about what I eat. Forever. Not just in terms of no dairy or gluten but in terms of blood sugar fluctuations (which happen with a vengeance even just upon consuming fruit).

And the lifestyle component. Sigh. I need to give something up to simplify, but I just don’t know what that is. I need to make relaxation a priority or I won’t do it. I need to commit not to just taking care of pain and digestive distress but to the whole of my body. And not just to promoting and cooking real food and being an active volunteer in school and community but also to the whole of my home and family.

Tonight my husband spent almost two hours in the car – including a bathroom and sushi stop at  Kroger – to bring me my baby to nurse and my son to see after I’d been at the conference all day, some 15 miles away. In the grand scheme of things, this is not the end of the world. The kids were both fine and happy during dinner, but I’m sure it sucked to be stuck in Dallas traffic for so long. My husband was pretty blitzed.

Other dads attend this conference with the whole family. Still other dads might go to McDonald’s rather than care about where their food comes from, much less want to spend money to sit in a hotel all day to listen to people talk about food. Mine is somewhere in between – supportive and on board but not an advocate or anything close to a purist. I don’t get criticized, but I don’t much get thanked, either. And I definitely get the sense that I kind of make things hard. Maybe I do.

I believe that my children and my husband benefit from all I learn — and practice — about health and wellbeing. Sometimes that seems to get lost in my pursuit of something like a writing and editing career (and the hope of a future career). And lost in my desire to spread the word about all the things that have made such a difference for me. It’s not just enough to live it; my life and my telling about it have to be meaningful.

So it can feel like an indulgence to go to lengths to have great experiences like coming to this conference. But then I meet someone 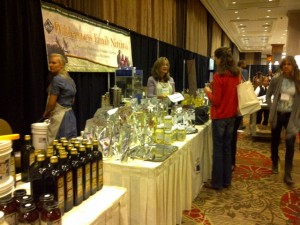 like Annette Fischer, who founded Wilderness Family Naturals with her husband in 2000. They were living in the wilderness with no electricity and no water, with seven children who were born at home, and they wanted to share information about living naturally through herbs. So they put up information (most of which had to be taken down due to pressure from the FDA), and now they sell the highest quality products they can find. I’ve been a happy customer for years, since I first learned about WFN from an employee at MOMs Organic Market. Now that I’ve met the co-owner and her eldest daughter of nine, aged 10 to 24 (they now have another two children who they adopted from Haiti), I feel like my passion and my family should not be at odds.

And I’ve just now heard Kristen of FoodRenegade.com talk about earning more money than her husband through her blog, with the biggest source of income coming from her own products: e-books and e-courses. She quit doing copywriting work – which allowed her to stay home with her kids – when a conflict of interest surfaced with a client, and now, three years after she started blogging, is performing such a service and earning a living to boot. While homeschooling three kids under the age of seven!

I can’t not write. It’s just not an option. And I can’t watch important things happen and not have a say. I think of my children’s future health and freedom to eat real food, but I’d also like to earn some green to go toward that food we buy.

Time to sign-off before I get picked up to head back to my father-in-law’s where I expect to be coaxed away about every two hours by a baby who wants to nurse. Before I leave again in the morning to learn some more.

How do you balance passion, work, and non-work?

Check out this post on my Washington Times Communities column — a quickie first-day update from the conference.