This post originally appeared on DC Metro Moms on October 2, 2009 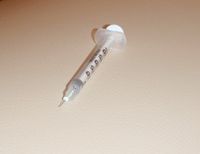 Imagine your 14-year-old daughter going from a competitive cheerleader with a 4.0 average to someone who has daily seizures, partial paralysis and a drug regiment of 33 pills a day. I’ve been attending the National Vaccine Information Center’s Fourth International Public Conference on Vaccination where I learned about the plight of Gabrielle Swank, who in 2007 had an adverse reaction to the Gardasil vaccine. Because of a family history of cervical cancer, Gabrielle (pictured here in this video tribute made by a friend) wanted the vaccine, which is designed to protect women from the human papillomavirus (HPV) that is responsible for cervical cancer.

Maybe every other mom out there knows about this case or about the various adverse reactions and the 32 deaths that occurred after Gardasil clinical trials, but if they do, then I don’t understand why I still see TV ads glowing about Gardasil’s wonderful protection. After receiving the vaccine, Gabrielle had immediate side effects, including headaches, fatigue and hair loss. But without a full understanding that these could be vaccine reactions, she went on to get the second and third doses of the vaccine.  She now spends 12-20 hours a day in bed and, because of her seizures, she cannot participate in a number of activities she used to do, even when she’s feeling well. She’s been diagnosed with cerebral vasculitis, a terminal disease, and she was not able to travel from Kansas to the DC suburbs for the conference. But the teen did tape a message to the crowd, explaining that she wished she understood that there was a risk to the vaccine and that she doesn’t want any other girls hurt by it.

Several people at the conference have acknowledged that vaccines may seem safe for most people, but if you or your child is one of the even one in 100,000 cases of adverse reaction… well, it doesn’t matter how rare it might be because that effect is 100% of your personal experience.

As parents, we never want to be that one exception that has a reaction to a vaccine or that gets a serious case of something contracted without vaccination.

I don’t intend to change anyone’s mind on vaccinations, but I do want to honor a mother’s fight to help her daughter’s wishes get met. Gabrielle pleaded with the audience thousands of miles away from her sick bed to keep this from happening to any other girls. I cried for her and for her mother, Shannon Schrag. Now owing over $100,000 in medical expenses that are not covered by the insurance company that covered the vaccine, Shannon Schrag’s heart has to break when her daughter tells her to stop the medication so that her sisters can be provided for when she’s gone.

Gabi and her parents both thought they were doing the best thing for her health. Don’t we all? But we also trust our government and our health care providers to share with us the information we need to make an informed decision. Before Gabi’s mother spoke, Diane Harper, MD, MPH, MS, talked at length about the development and efficacy of Gardasil and Cervanix. Having herself helped Merck and Glaxo SmithKline develop both of these HPV vaccines, Harper gave a balanced, frank presentation for which I’m grateful. She proposed a model of informed consent and shared decision-making with patients who must be told that the duration of protection provided by the vaccines is unknown and that the vaccines can only postpone cervical cancer, not prevent it.  And, she said, no substantial public health decrease in cervical cancer will occur until at least 70% of the population is vaccinated. But even then, if women get the vaccination and don’t get screened, there will actually be an increase. Nothing is simple.

As the mother of a son, I can look at the issue with some distance, for now, since HPV vaccines aren’t yet targeted to boys. But I still want all parents – and young women – to be presented with the full range of information. Don’t we deserve it?