This post originally appeared on Dc Metro Moms on January 4, 2010 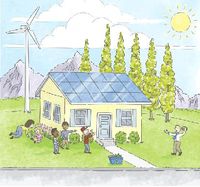 After a week home with a son who was just sick enough to have to stay home from preschool, followed by a weekend of the biggest December snow ever in D.C., I was ready to get out o’ town on Christmas Eve. The cab that took us to the airport for a week with family was driven by a man who explained that his youngest son, too ill to go out in the snow, was kept busy by his two older brothers. He gestured to my almost-four-year-old son, “He needs a brother or sister.” Ahem.

Nosy, but right. I don’t really love the dynamic the three of us have going on at home these days. Life was very different (read: much more fun) with the two other toddler cousins, their parents, and grandparents around the first half of our holiday visit. It kind of sucks that this happens only once or twice a year.

Managing three kids under four in one unfamiliar house was challenging and requiring of some adult supervision, sure. But my son was playing, all the time, and it usually didn’t involve me. This was a major bonus. I can’t even believe I’m saying this, but I actually took a nap. Twice. I might as well have been fed grapes by a golden-chested god . Three cheers for cousins!

Then we went to visit another segment of the family – the one with six cousins (plus four aunts & uncles in one house, in addition to us and to the grandparents and uncle who were staying at a nearby hotel). What was so amazing? I hardly ever had to see my kid. He was in heaven. I was in heaven.

When I sat in the bathroom with him, it was actually enjoyable to listen to him share his exploits with trains, an indoor basement swing, a pink castle. Because these adventures did not involve me. Even when a kid is pooping, how much more fun it is to hear about things he’s been doing when I haven’t had to participate (which, at home, is usually to the exclusion of doing laundry or working or cooking dinner).

That’s what I’ve been missing – distance. When I’m not around my son all the time, I get so much more of a kick out of him. But of course distance from my son requires the involvement of other people.

After his sick week home and his whining about going back to school in January, I’ve been feeling kind of guilty that I shove him away for three days, 8:30-3:00 (even if I do think he’s better off with the calm Waldorf teachers than with scattered me). And I feel bad that I still complain that I don’t have enough solo time – to work, to work out, to do volunteer work, to take care of my mental and physical health. If I just didn’t have so many interests, I sometimes think, maybe I’d enjoy just being with my son more.

Now I know what so many people have already figured out. It helps to have help. Living so far from family is a challenge. What a treat it would be to have someone else around besides me as the sole (until Daddy gets home at the end of dinner) person to play with and converse with the boy (or to ignore his pleas). Yes, I know what a babysitter is, but the work to schedule and the money spent detract from the benefits.

I have zero desire to move back to Michigan and no plans to move to be closer to the non-Michigan family members, either. I like where we’ve settled outside of DC, and in many ways, I have a great community of friends. But they are not family.

I was already pretty envious of the woman down the street who seems to unproblematically live with her parents (rent-free, I think. And with full-time childcare!); of a grandmother I know whose daughter, son-in-law, and young son live with her and her husband in what appears to be a lovely harmony (borne out of a homeschooling background); and of other mama friends who have family in the area … or who have two or more kids who are already friends & playmates.

Now we’re back at home, just the three of us, and the boy is again clamoring for Caillou on the laptop with no one but us to play with as an alternative (if you can count helping us unpack and do laundry as play). I’m seriously missin’ the love. And am more aware than ever of what I’m missing.

On the plane ride home, I read a Mothering magazine article (“Three Generations, One Roof” by Heather Hall) that talked about a family that built a multi-generational home — for a young family of five and two sets of grandparents. The author took time to defend the idea of living with family, but I needed no convincing. It makes sense to stay connected to people who are not only interested in helping out but invested in a relationship with my son.

Although we still haven’t left my son overnight, I feel zero guilt about keeping busy when his grandma comes to visit. It’s not just free babysitting; it’s the boy getting to know his grandmother. (Well, I do feel a little like I’m exploiting her, but she seems pretty serious when she says she doesn’t come to do special stuff with all of us but to spend time with him.)

It would be nice if we all wanted to live in the same general area or if all the grandparents were healthy enough to jet back and forth as often as their pocketbooks would allow. But that’s not our reality, so I best get to appreciating my friends who help out from time to time.

And to thinking about giving this kid a sibling.