You are here: Home / The Arts / How TV and books influence our thinking about tough subjects

Television may have informed my opinions even more than I previously thought.

Sure, I’ve complained for years about how I watched too much TV as a child. How I learned social skills by way of backstabbing wives on “General Hospital.” How the girl and girl and guy of “Three’s Company” were as much a part of my family as Alice was a part of “The Brady Bunch.” How Saturday night was not complete without popcorn and Pepsi and “Love Boat.”

And look how I turned out: someone who doesn’t know how to be a good friend or housemate or partner and who only in her thirties did more sleeping at night than nodding off during the day. All good reasons, I’ve thought, to keep my son on a healthy diet of no sugar and little TV.

But then I think about that episode of “L.A. Law” I saw in 1990. At least I’m pretty sure that’s when it was. I do know it was the night before I got up early for a long bus trip to a Forensics tournament on Mackinac Island, and I only went my junior and senior year in high school. I recall not being able to shake the feeling of heft from having watched a fictional execution on the crime drama.

The circumstances of the crime at hand and even the degree of assuredness of the prisoner’s guilt escape me. I just remember seeing the chamber and the gas and the witness box and thinking there was a whole other side of life and death and everything in between that I had not considered. I know I watched the episode with my parents, both opponents of the death penalty. 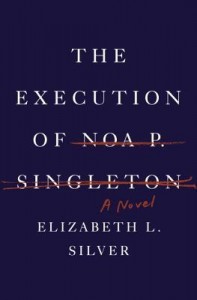 The colors I associate with the episode are green and grey. As I read The Execution of Noa P. Singleton: A Novel

by Elizabeth Silver, this decades-old image kept hovering over my eyebrows. I recall telling some of my fellow field trippers as we stood in the parking lot that morning, “That show sure made me think more about the death penalty.” And over two decades later, it colored how I read a novel.

There are a lot of things I don’t want my young son exposed to yet, but he does go to public school and watch sports with commercials and see videos from time to time (though only a handful of movies thus far, at age seven), so it’s not like his only exposure to violence or adult content is limited to watching animals in the woods.

But his mother does shun mainstream media herself these days, sometimes to her detriment. I really am quite out of it, something that becomes apparent when I go to PTA meetings and attend conferences like BlogHer, where I was last weekend. There are a lot of cultural references I miss. I feel old before my time in this respect, like I’m not part of the conversation.

And I’m starting to wonder about exposing or not exposing my son to more television. I don’t think it helps his imagination in its young state (and it certainly isn’t doing any favors for the brain behind the eyeballs of his three-year-old sister). But at some point, I will want him to consider tougher questions about the world, and media is one way to do spur that thinking.

I don’t expect I will ever buy a video game system for our home, but my son does see and possibly even play slightly inappropriate games at friends’ houses. Without other gritty contexts – safer, more passive fictional contexts – those games have to see even more bizarre than they already are, right?

Reading is certainly the best way to both imagine and engage. As I found myself picturing so much during the reading of the novel about a woman on death row based on a flash of an image from one TV show and nearly-as-vague memories of movies like The Green Mile and Shawshank Redemption, I began to feel less negative toward some of my youthful TV-watching and to think there is a place for television drama in the life of an adolescent.

I received a free copy of this book for my participation in the From Left to Write Book Club. I enjoyed the book and am looking forward to reading other readers’ posts inspired by it.