This post originally appeared on DC Metro Moms on September 26, 2008

Glad I Never Made It 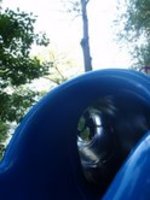 I’ve always said I chose to live in the DC metro area because of the cultural opportunities. As a teacher, I took my world lit kids on field trips to the National Museum of African Art and the adjoining Sackler and Freer Galleries of Asian Art and my literary magazine kids to the Hirshorn Museum and Sculpture Garden for the literary-art magazine class. I imagined that, as a mom, I’d stroll regularly around the museums on the Mall as soon as my son could sit up. But as it turns out, I’m no Susie Smithsonian.

I can think of only two times I’ve made it to museums with my son this calendar year. That’s almost nine months. I could have gestated a second baby during that time. Both museum trips were not simple weekday jaunts but rather excursions with visiting cousins. One was to the National Museum of Natural History‘s butterfly exhibit (on a free Tuesday) and the other was an attempt to escape the rain and wait out the long line to the Metro after watching my husband and brother-in-law finish the Cherry Blossom 10-miler.  My nieces and I bought earrings at the Sackler gift shop, and I nursed the boy in a quiet spot by the bathroom around the corner from the Buddhas. I didn’t exactly emerge enlightened.

Activism and community involvement haven’t had much more play; our one trip to the White House was for a protest march as part of the Split This Rock Poetry Festival back in March.

I carried my son on my back in the Ergo from George Washington University (where he’d sat through about seven minutes of a poetry reading) to the site where we all read our ten words that were supposed to make up a cento, or group poem. “Paint me a future I’m not ashamed to leave my son” was my contribution. That was baby’s first poetry reading and activism, I guess, outside of nurse-ins at Reagan National Airport and on Capitol Hill, which did make me feel a little connected.

When I saw that Joy Harjo was scheduled to appear at George Mason University’s Fall for the Book Festival, I planned to take my son, in part so that I wouldn’t miss another year of the festival and in part to avoid a fight over naptime in which my son, lately as wired as I am, amuses himself by biting — biting — my hair.

Until I can get my butt to IKEA to buy the kid his own bed to put in his own room and finally start a new routine (good luck with that!), I’m devising ways to avoid the afternoon tussle that drives me crazy even on the days I’ve had morning childcare. I figured that if he didn’t fall asleep on the way to GMU, maybe we’d both calm down hearing the music and centering words of Harjo’s new CD, Winding Through the Milky Way.

But I was running late, as usual. While I was furiously eating a rice tortilla sandwich, Stanford neurobiologist and stress expert Robert Sapolsky was talking on the Kojo Nnamdi show on WAMU about the fact that our bodies are wired to deal with only occasional and life-threatening stress (think large mammal running toward you), not chronic low-level stress, which causes our bodies to shut down non-essential functions — like growing, and digesting. This is something I know and was even going to write about for an anthology submission due next week. But I haven’t had time.

When a clearly tired toddler asked to go home, I looked at the clock and decided to turn around, hoping the Beltway would be clear and soporific. Soon I was trying to transfer a sleeping boy into bed. When he stirred as I tried to leave the room, I knew I had no choice but to nurse him and put on a good show of calm or all would be lost. My deep breathing helped us both, and I left within minutes. To the white noise hum on the monitor, I relaxed with some Trader Joe’s organic chocolate with almonds (tryptophan is supposed to calm you, right?) and read Harjo’s essay, “Sacred Connection to the Sun,” written and recorded for NPR’s “This I Believe.” In it, she talks about holding her granddaughter up to the sun to remind her of her connection to the rest of the universe.

Three years ago, when I (finally) got pregnant with my son after some stress-related health issues, I did yoga every morning and swore I’d live in the moment. I figured we’d happily go on hikes and other low-key activities from the glow of my SAHM nest, venturing to calmly look at art whenever we felt moved to leave our neighborhood. But truthfully, having no plan usually drives me batty so I schedule most mornings and leave no time — or energy — to make it to the Mall for museum meanderings. I rely on two mornings of childcare just to keep me sane, and any activity that doesn’t get me some adult interaction usually seems like a wasted effort. But on this day, with a rare nap accomplished and the words of Harjo and the Stress Guy in mind, I happily snuggled my son when he woke up.

“You can take your time pooping on the potty; we’re in no hurry,” I said for once. “When you’re done, we’ll take a walk in the woods, just the two of us.” He greeted the novel idea with a non-judgmental, “Oh!”

On a spectacular September afternoon, his little legs carried him all the way down the hill near our house to the park, and most of the way back up home (though we both got a kick out of his short ride — the first in a long time — with him snug against me in the old Ella Roo Ring Sling). I couldn’t believe it had taken me two and a half years to do this. When we got home, I was excited to see my husband’s car already parked out front. That is, until he emerged from the house not ready to hang out with our boy and hose down our new Freecyle-find wagon but in his running clothes. I was still on duty, and now it felt like duty again.

Back to reality, I got frazzled about the prospect of getting dinner ready (and eaten!) and getting the boy bathed and me dressed to go out to tutor in only 90 minutes. I still wanted a break or a little help. But I’d had a good couple of hours and at least I felt like I’d accomplished something — by not making it to an event.

Ahhh…those sweet days when you just chill. Sounds like it was one to savor.

Sometimes my son and I just take walks- and it’s better than ‘the air and space museum’…
which is too big for him anyway, it’s too much :)
glad you got a moment :)

Yay for stoppng to smell the roses! Welcome to DCMM!!

Excellent post! Failing to accomplish your original objective often makes for a much better time!