This post originally appeared on DC Metro Moms on August 31, 2009

Birthdays — the key part is the “happy” 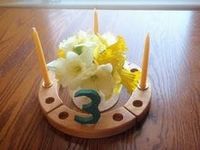 My mom and I used to get giddy about our almost-shared birthdays, which are two days apart in early March. But in 1987, nine days before my 14th birthday — a week before my mother’s 50th birthday — my older brother committed suicide. Needless to say, my family’s world was shattered. My siblings were all a lot older than I was and closer to him, but I was still a self-centered teen who wanted attention.

For years later, the anniversaries weighed heavy on us all, and birthday bliss was just not an option. Add on top of that that social events and hostessing stressed out my already-depressed mom, and you’ve got a recipe for loneliness, even if the anniversary and birthday weren’t in the already-bleak late February/early March. That time of year is still hard for me to the extent that I sometimes think I bring on my own drama, like I did this year.

But my son. Oh, he’s a different story. His birthday comes just 20 days after mine — just after the technical turn into spring. And for him I want happy memories attached to good feelings. So we’ve always done birthday playdates where our friends just come over and we have lunch and some gluten-free cake. We sing and this year I had balloons, bubbles and sidewalk chalk, but I ask for no gifts and don’t give party favors, a la Birthdays Without Pressure. We give him presents, as do his grandparents and, sometimes — away from the party playdate — do our good friends. But I want him to associate celebrating with people in his home and happiness. And some special time with his parents and some candles and some good food.

This next year he will be four, and I think I’ll probably keep up the low-key plan.

I’d like to see, though, if I can successfully pull off something meaningful with the playdate– like planting seeds — without cranking up the stress meter. It would be send our friends home with the promise of new life in early spring.

Maybe someday we’ll go to weekend parties where we invite kids and both sets of parents. But as long as I’m not working, that seems like too much. I think I’d rather do a special activity, like a hike. It would be nice to come up with something that we do every year, but that hasn’t happened yet. Heck, this last year the major thing on my mind was that we were going to have his third birthday be the last day he nursed. Can’t really repeat that!

Although I’m sometimes jealous of folks who have grandparents and aunts & uncles in town for the special day, I don’t expect my extended family to get to town for his birthday. They live far away and aren’t in the greatest of health, and there are better times throughout the year to enjoy their company.

I just want him to feel like a birthday is a happy and simple time. That’s a feeling I don’t think I’ll ever have about my own birthday.