When I was a teacher, I considered spring break a reprieve from grading and early morning wake-ups and dealing with adolescent angst in 120 flavors. But now that I am a mom with school-aged children, spring “break” is a misnomer.

It is a week when I feel the weight of responsibility of keeping to a rhythm that will not throw my kids off while also not throwing me off. Of finding things that are fun and not too tiring or enjoying unscheduled time but knowing the precise moment when to shift gears before we all turn into blobs for having no clear boundaries. Of finding and preparing enough food for all of us and then cleaning up from it, three or more times a day.

Part of the reason this week felt like such a non “break” was because the weeks leading up to the break were rough. They included 5 out of 10 days of school with kids home sick (with a mild virus with “wait 24 hours” symptoms even though they really were fine and interested in engaging with their mom more than sleeping it off). And that two-week period came on the heels of a winter with so many snow days while I was working toward the 5-year anniversary party for my chapter of Holistic Moms. And it came just when I was trying to gear up to launch my new (call it a business someday, maybe?) website, Mindful Healthy Life of Metro DC. The creation of the site was supposed to be fun, but not if the time to do it just poofed away!

If any one of those pieces had not been part of the puzzle that was February-March-April, well then maybe I would have been more excited for the “break” from packing lunches and getting kids out the door at 7:45 a.m.

But several nights of interrupted sleep dealing with sick kids (and then not sick but springtime coughing kids) on top of all the missed work time kind of sent me down a scary spiral. We had no firm plans for the week, and I wasn’t sure what I could pull off.

Hearing  in person and reading on Facebook about other people’s plans and trips and joyous adventures with their adorable children just made me sad. I wanted to have fun with my kids but felt so depleted: tired, depressed and unsure how much energy I’d have for any excursion.

Five years after I ran the April Parkway Classic 10-miler and a half-marathon two weeks later on mother’s day, it feels kind of pathetic to worry that a day at the zoo with my kids might zap me. Yes, I’m seeing practitioners and am going to get some more testing done, but I also know from experience that the best way for my challenged body to feel good is to have a bunch of conditions met, at least the following:

When my kids are around all the time and/or are sick, I find it impossible to do all those things. I wish I weren’t so sensitive to needing so many things to be “just so,” but as I wrote in my “Special Needs Mommy” post, all those things put together are like my medicine.

So, to get through the week off of school with some measure of sanity intact, I stayed away from reading about other people’s fabulous lives on Facebook, started taking a bunch of flower essences, and tried not to go too long without eating.

Children made a mess with the toys we had while I deliberated whether we could brave an excursion that chilly morning. We ended up going to Michael’s in search of a Rainbow Loom, which has subsequently made more mess but also occupied both children for good amounts of time. 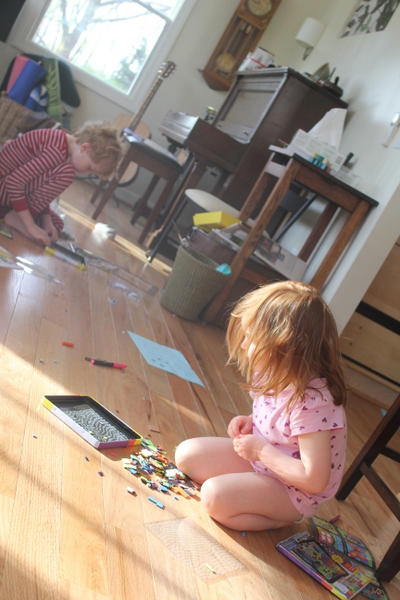 Why anyone would choose to take their children to a craft store is a mystery to me, but I did manage to survive.

We were lucky enough to have a playdate later that afternoon with neighbors and their visiting grandpa, who read the newspaper while I cleaned and prepared dinner.

Rain. Then just light gloom. Then more and more rain. We had the people from Love & Carrots scheduled to come help us with spring cleaning and planting. It was too wet for my kids to help with small seeds, and my daughter didn’t last long outside, but we all helped weed and prep the soil, and my son got to plant a lot of seedlings while I came inside to bake muffins with my daughter as promised for our trip the following day. 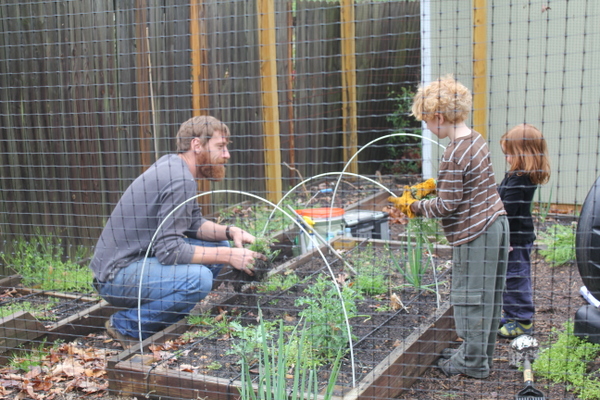 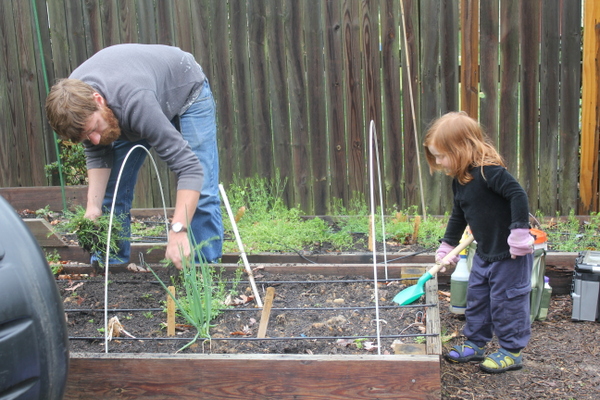 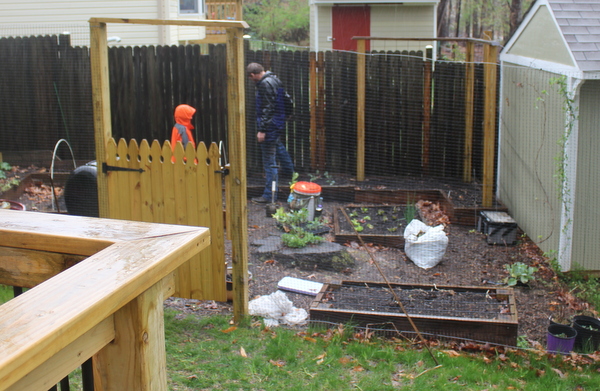 The plan was to head up north toward New Jersey, where we’d stay with my sister and her daughters for the night, and to do something fun in Baltimore on the way. But it was so cold that morning. It took forever to pack up to go, too long to find gas off the BW Parkway (since I’d forgotten to get it down the street from my house), and too long to wind through Baltimore just when the Orioles game was starting, but we managed to make it to the Baltimore Zoo and had a lovely 2 hours (which makes the $60ish we spent on admission and train and carousel and a salad something seem only like 50 cents per minute or only just over 15 cents per person per minute!)

The penguins were my favorite. But it was cool to see the cheetah so close, too. And there were three elephants. And not a lot of people. That was key. 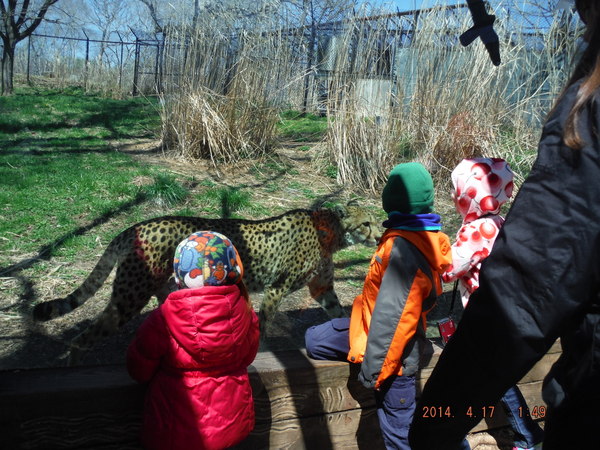 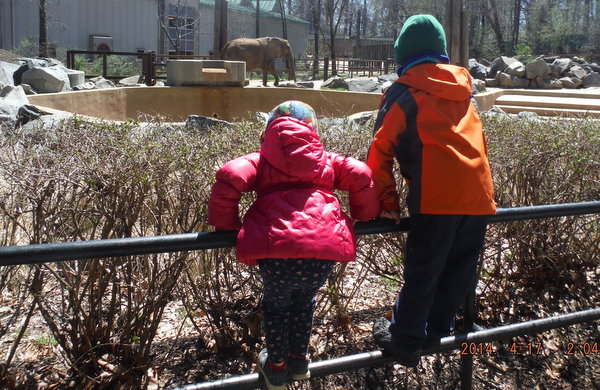 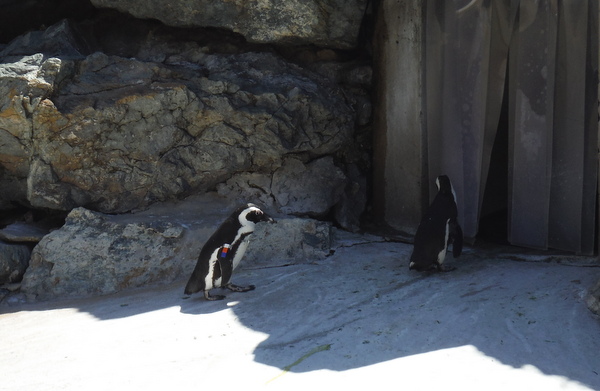 Following the aunt and cousins’ minivan, we arrived at The Crayola Experience about 40 minutes after it opened for what would be probably one of the most insanely crowded days ever. It was a blast, and I’ll write a longer post about it someday, but the most important thing to say is that I wouldn’t go again during a break week, not if I couldn’t be there before the place opened and head straight up to the fourth floor for the long-line special activities. 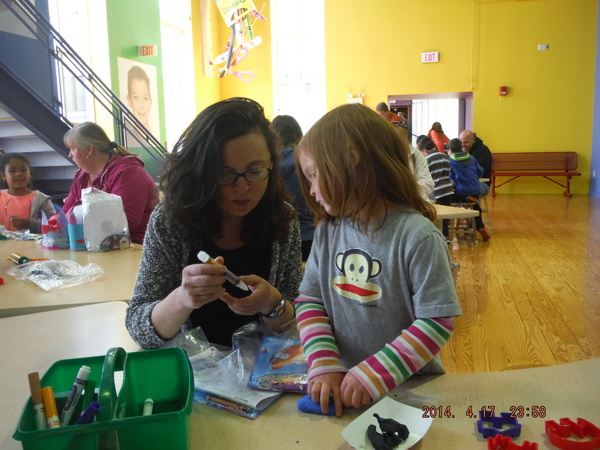 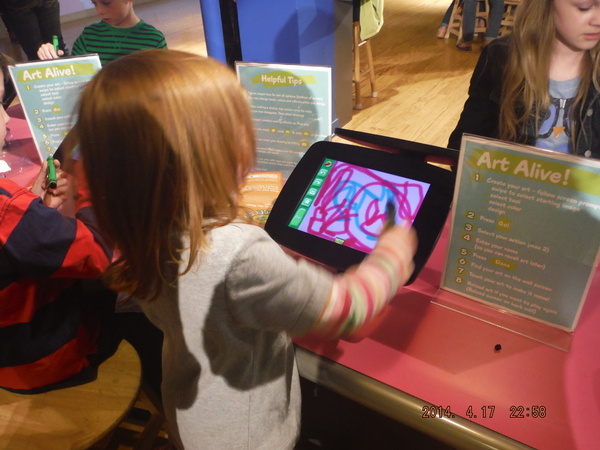 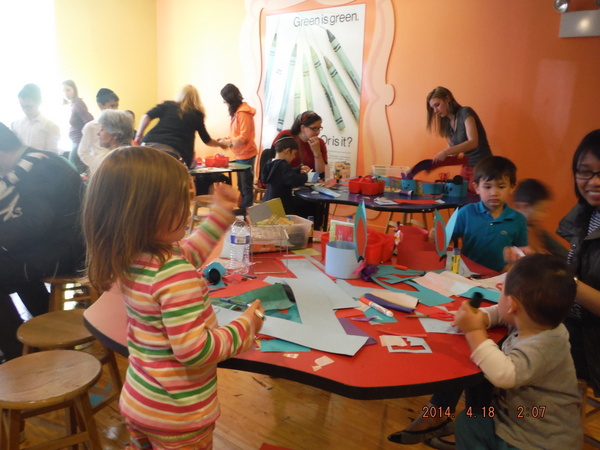 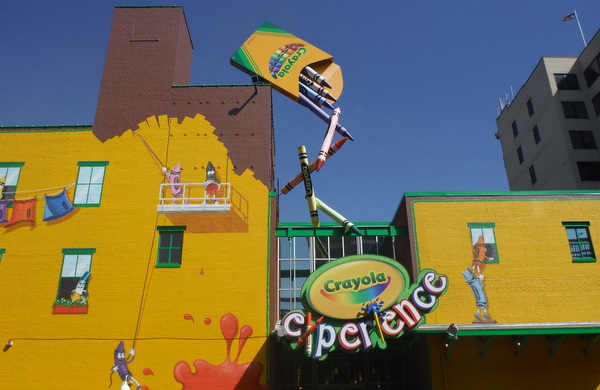 And I would not try driving home to DC leaving Easton, PA at 4:00. It took me almost two hours to go less than 30 miles with a crying child who needed to poop but wouldn’t when given the opportunity. It might have helped to realize I had a full sized Atlas in the car behind the over-the-seat trash thingie. Let’s just say I’m grateful for texted navigation help by family with computers and, well, for Rite Aid and Pirate’s Booty.

My son was signed up for a theatre camp this day (starting just 11.5 hours after we’d gotten home the previous night!). I was looking forward to spending time just with my daughter and maybe even getting a tiny bit of work on the new site done while she got immersed in drawing or just being in her home after two days away. Instead, though, it felt like the entire day was spent unpacking and cleaning a car that had gotten so very far beyond dirty (and that my daughter persisted in dirtying some more while I cleaned it). 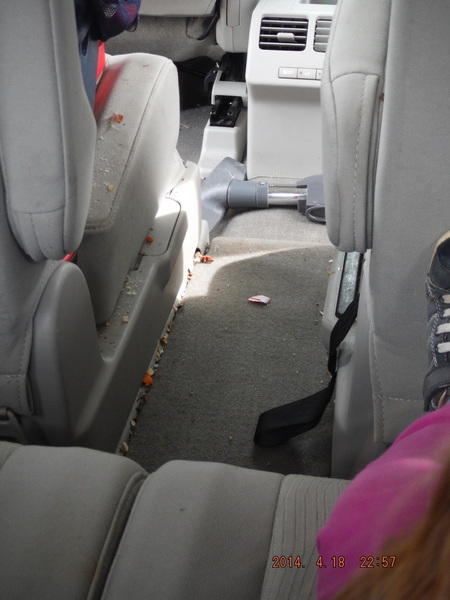 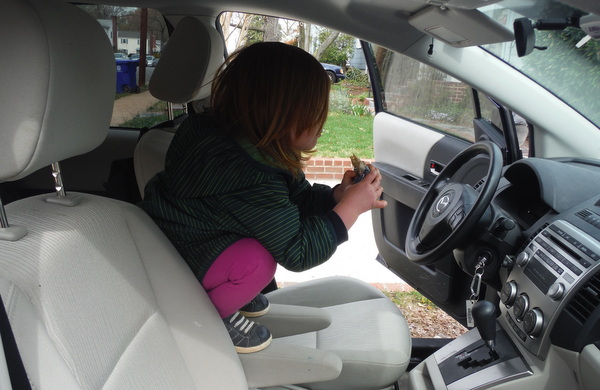 The night before, I’d felt decent after making it through the five and half hour drive, arriving home at 9:30 p.m. But I was kind of toast on Friday.

We got some things done around the house over the weekend and played some with neighbors. My kids took more photos with our new camera on which my son somehow activated a time stamp. 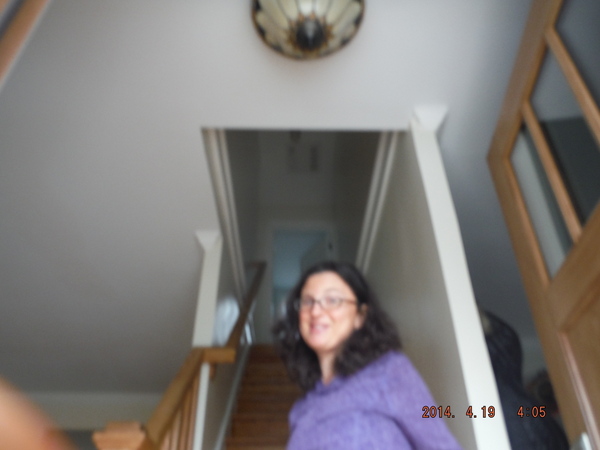 It was nice to not have soccer for the second week in a row. I juiced for the first time in a while. I did go out for some Easter treats and set them out with the decorations we had Sunday morning, but we didn’t dye or hide eggs or make a special meal. 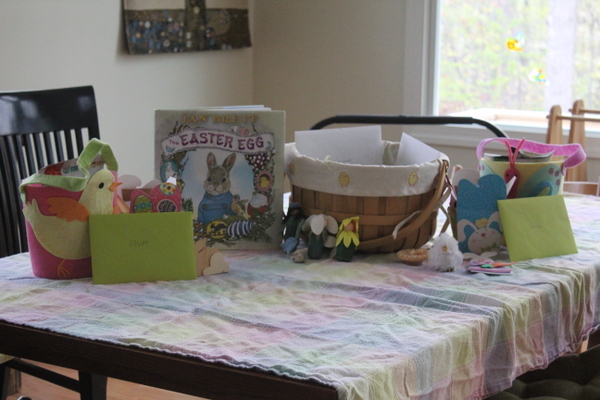 I cooked a chicken with vegetables, like I do most weeks, and when my husband got home from Ultimate, he made a GFCF bunny cake with my daughter that baked while my son watched sports highlights and I took a walk. looked forward to my kids going back to school on Monday. 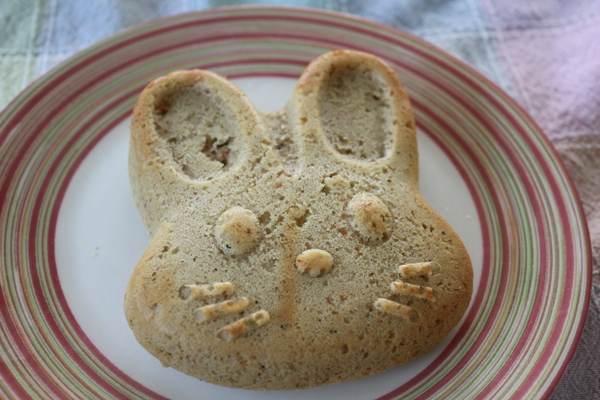