You are here: Home / The Arts / A day of SAHMing

Yesterday there was no childcare or playdate. Just a lot of rain. I truly felt like a stay-at-home mom, like back in the day before I took on freelance work or started up a chapter of Holistic Moms.

Some of yesterday was full of giggles. Some had me wanting to rip out my hair.

I consider it a victory that: I did a few stretches at home, then made it to the grocery store and then to yoga. My daughter had a few fussy moments during Lil Omm’s yoga playtime (an adult class where kids can hang out), but for the most part, I got in a decent practice. Of course, I was going just on fresh juice (kale, carrot, lettuce, parsley, lemon, beet) and didn’t eat breakfast until 11:30 after I’d put the babe down for a nap.

It would have been nice if she’d slept more than an hour and if she hadn’t been so whiny during the time of just us girls. At least, after her insanely mammoth poop, she amused herself in the tub while I folded clothes. (Note to self: get replacement plug for tub since husband threw out the old one). And then, before we headed to the bus stop to pick up her brother, we both gorged on Artisana coconut butter. 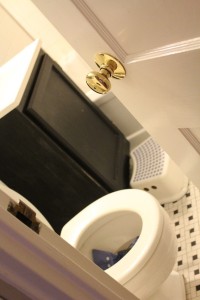 The happy surprise was that after she rejected my attempt to nap her again while her brother, ravenous after a hard day at kindergarten, was eating a second lunch, she was in a great mood. The two of them played individually and together for a good long while, during which time I chopped vegetables, washed dishes, and read and wrote emails related to work, the house, school and weekend planning.

Last week, I caught a piece on NPR about a study in the American Sociological Review that talks about how much more multitasking working mothers do than working fathers — and how much more stressful the mothers’ multitasking is. It’s worth a listen. When your brain constantly is engaged in three projects, it can’t do any of them well. Our circuits get fried. It’s tiring and not rewarding for us. And for our kids who have only a small pie piece of our attention, it’s got to be annoying. I don’t advocate dropping everything to coddle your kid 24/7, but some more focus on words that start with h, c, f, and d might be nice, I’m sure.

So the time from 3:30 to 5:30 was more productive than it was glorious. I got to plug in while they played well, and I only had to wear the baby on my back for a small chunk of time. She perked up when I fed her pomegranate, and I actually bounced on the rebounder (a few different times, since she kept climbing up to join me) and did a little more yoga in the few minutes between dinner being ready and my husband getting home. The physical activity alone made this a banner day!

But, after my son came downstairs at 8 p.m. complaining that he couldn’t sleep, I felt a little guilty for not giving him more focused attention and for not getting us all outside despite the rain. Ironically, I was in the middle of writing about natural playgrounds and playtime at school when he toddled in his too-small red jammies into the dining room, blinking at the light.

“Just for morning break,” he replied, acknowledging that lunch recess was indoors. “We always went out in the rain at my old school,” he said of his Waldorf school. “I don’t know why they don’t go out in the rain at my new school,” he mused, pointing a knife toward the heart of his mom who chose free public school with a full day over returning to the outdoor-enthusiastic but tres expensive half-day Waldorf school.

I asked if he ever missed his old school, and he said yes, a lot. When pressed on what he missed, he described in great detail the joyful experience of playing with the rain that dripped down from the gutters of the old church that housed his school.

And then he switched his gushing praise to the current state of affairs, where he can pick to ride a trike or scooter on the track at school (and where he’s previously said he loves the big playground, and the soccer games at lunch). The enthusiasm about the new place was heartening. 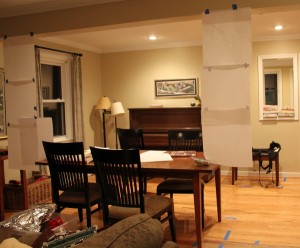 I came back downstairs, checked a few items off the to do list my daughter had scribbled on hours earlier, finished an email, and went back to pacing out the floorplan of the next door house we are going to renovate starting as soon as we can make our decisions and get drawings ready to submit for permits.

When the baby started crying at 10:10, I said goodbye to the day, knowing that in the morning — after I got juice, broth, veggies, egg and sausage made, lunches finished up and packed, newly washed (and dried in the dryer because they were still in the wash when I went to bed) diapers stuffed and a new one on my girl’s bum before she went to the sitter’s — I knew that I’d get to pretend for a few hours that I am my own person who can do one thing at a time. 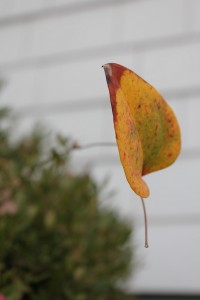