You are here: Home / The Arts / The Best Bad Luck I Ever Had – a novel for middle school aged readers 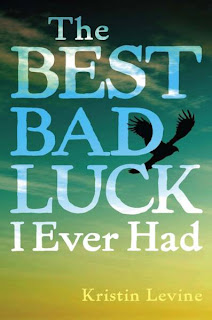 A few weeks ago, I was lucky enough to attend Hooray for Books‘ book release party for The Best Bad Luck I Ever Had, a novel for middle grade readers by first-time novelist Kristin Levine. I did, however have with me my son (just a month younger than the author’s daughter), and keeping him from pulling books off the shelves of the cute Old Town Alexandria bookstore kept me from hearing all of Kristin’s backstory about the creation of this wonderful historical novel. I do know that events are based on experiences of her grandfather, and I know Kristin put in a good bit of research to pull off this great story.

The narrator, Dit, is an eleven-year-old white boy in 1917 Alabama. Although he has nine siblings, he’s looking forward to the arrival of the new postmaster — who traditionally rents a home from his family — because the postmaster is supposed to have a son Dit’s age. Dit hopes to show this boy his baseball glove and play with him over the summer. Much to Dit’s chagrin, the new postmaster from Massachusetts has a bookish daughter, not a son. And to everyone’s surprise, the family is black.

The novel does a great job of conveying in many different and non-cliched ways the theme of not judging a book by its cover. The message, infused throughout with humor, can be appreciated by the target audience and adult readers alike. Dit tells his story in dialect, an approach that roots the narrative in time and place — and in the voice of a child just learning about the world — but does not alienate twenty-first century readers of any age.

This fresh window into early twentieth-century history tells serious and scary truths in an accessible and surprising way that will have even the most jaded readers feeling hopeful. The book, which came out out just days after Barack Obama’s inauguration, seemed to fit right into the emotional wave we were riding here in the DC Metro area where the National Mall was packed with people pinching themselves that we’d made it to this point in history.

Having taken a writing workshop at the Writer’s Center with Kristin, I was not surprised to find her novel such an enjoyable read. I am thrilled for her that she’s getting such great reviews (check out her web site at www.kristinlevine.com) and inspired to have seen a fellow mama (not to mention a pregnant mama, and a La Leche League leader, and the wife of a former teaching colleague of mine) have such great success!