You are here: Home / Uncategorized / Election ’08: One more take 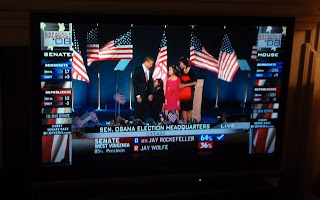 Everyone and her dog is writing and talking about the election. It’s one of those phenomena we all have to talk through endlessly to process. Did it really happen?

Yes, it did. The United States of America elected its first black president. Two weeks ago, a campaign button made the impact of this reality — then just a hoped-for reality — sink in for me. It was a black and white image inside a red border that read in white lettering “America’s Next First Family.” I didn’t photograph the button, and I can’t find an image online, but trust me that the B&W image and the angle of the photo — taken looking up at the seated family, if I recall correctly — conjured the image not of splashy and colorful 2008 or the future but of the Civil Rights era. This was old school. The button’s photo looked like a still from the PBS documentary Eyes on the Prize, but it was reflecting today. And tomorrow. A black family. I really got it.

How powerful an image, especially for this former teacher, a white woman who used to work predominantly with students of color, many of whom lacked a second parent (usually father) at home and many of whom seemed to have written-off mainstream America as simply not their world. Who can blame them?

I hope we don’t start to hear arguments that because Obama was elected, now the playing field is level and everyone can do anything. There are still grave inequities in education, health care — and the list goes on — that will not go away just because of this powerful new image.

But I do feel that swelling of optimism, that buzz from the idea that the country believes we can have this kind of hope and see it through. Obama’s decisions and policies will be important, but right now the elation I and many of my friends and family feel seems to come from this sense of a new beginning, a start of something that seemed impossible, an opening where we thought there was none. Much of this collective euphoria comes from the way Obama speaks and conducts himself, sure. However, it is impossible to say something to the effect of “he’d be effective even if he were white.” He is not white. He is who he is, and he has always been who he is. Everything he offers comes from that identity, that past, that sense of self. That reality that there may be an uphill battle but that nothing is more rewarding than the privilege and ability to make the climb.

When people who’ve previously succumbed to cynicism now can see a mountain as an opportunity, the game of life is simply transformed. That is the kind of future I want my son to inhabit. 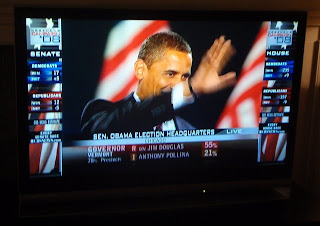