You are here: Home / Uncategorized / Fabulous birth symposium!
I was blown away at this week’s symposium at George Mason University: “Perinatal: A Symposium on Birth Practices and Reproductive Rights” organized by MFA candidate and mother of two, Jessica Clements. There were so many great panels and talks, I hardly know where to begin. In fact, I may leave summary to a print writing venue but for now feel compelled to share a link to the story of Joy Sza 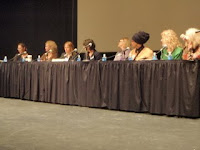 bo from The Unnecesarean. Szabo is a woman who has already had a VBAC and has been told by her Page Hospital in Arizona that if she refuses a c-section for her current pregnancy, the hospital will pursue a court order to force her to have a surgical delivery.

Henci Goer reported on this issue in her fabulous talk, “Cruelty in the Maternity Wards: Fifty Years Later.” She had just added the info about Szabo to her talk, which detailed other incidents of abuse and an overall culture of abuse in mainstream maternity care. The news about Szabo broke October 1, and the The Unnecesarean has updates about conversations with the hospital, but I don’t see that Szabo has had the baby yet. I’ve followed the discussion onto Facebook and am going to see if I can learn more that way. (Too many different logins so I can’t do it now. Must streamline!)

Posted by Crunchy-Chewy Mama at 11:55 AM

I’d heard about this symposium at the last minute, and unfortunately already had a chiro appt. scheduled for that night, but was bummed I couldn’t go. I’d heard about the Szabo case earlier this week on a news aggregate, so at least it’s getting some national attention. What a disgrace to the state of healthcare in the US! I’d love to hear more about what was discussed if you have any other links.
October 10, 2009 10:53 PM